The Man Behind "Maybe Tomorrow"

[Author's Note: In honor of the 50th Anniversary of the Stonewall uprising, I am reprising an article (with some minor cuts) that I wrote about Jay Little, the author of the ground-breaking gay novel Maybe-Tomorrow. The profile first appeared in Ganymede, an online literary journal, in 2010. It has only recently come to my attention that the website for Ganymede is no longer active, so any links to the article are not viable. I thought it best to repost it here in case anyone is searching for it, or is researching the writer. At the time I wrote this piece, the man behind the pseudonym Jay Little was virtually unknown. I took pride in having rediscovered him, thanks to the assistance of his nephew Ray Yoder, and recounting his fascinating story. I hope that people will continue to read his remarkable novels and celebrate him as the true pioneer in gay literature that he was.]
Introduction from Ganymede Journal, 2010:
At our request, Brooks, the Hercule Poirot of gay lit detection, rescued from complete obscurity JAY LITTLE, a pulp fiction author who published gay-positive romances of men loving and living without self-hatred. His two novels were widely read and reprinted during the fifties and sixties. His real name was Clarence Lewis Miller (1911-2001), nicknamed Tex, a singer and actor who bounced around the lower reaches of show business before settling down with a male partner, opening a restaurant in Texas, and writing his novels. (Photos courtesy of Ray Yoder.)

Resurrecting Jay Little
In the annals of vintage gay fiction, one author stands out as truly an enigma: Jay Little. Most people today have never heard of him. In fact, the two books he wrote are almost completely forgotten, except by collectors who cherish classic camp. Many current “queer studies” scholars don’t pay much attention to Jay Little today, which is not surprising, since his books are amateurishly written and verge on what one critic labeled “soft-core pornography.” His singular oeuvre is often dismissed as irrelevant, a footnote in homosexual literary history.
And yet, Jay Little was one of the most influential gay writers of the 20th century. His two novels, Maybe-Tomorrow and Somewhere Between the Two, both self-published in the 50s under a pseudonym by a vanity press, were surprising bestsellers. One figure I found estimates he sold over 200,000 copies—and this at a time when “deviant”-themed books were widely censored, if not banned. Even Gore Vidal claims that he was blacklisted for years by the New York Times after he wrote the now celebrated gay novel The City and the Pillar in 1948. Ironically, Jay Little’s books were advertised in the Times right next to books about God and religion by Dale Evans and Roy Rogers. Later they were promoted vigorously in various magazines of the period.
Despite his marginalization, Jay Little had a profound impact on many of the liberated authors who came after him. Sometimes this influence was palpable, deliberate; other times more subtle, in fact, unconscious. For Jay Little was one of the first gay novelists to openly explore what was then labeled “the Twilight World of the Third Sex” —the homosexual demimonde. He didn’t couch his story in highfalutin’ psychobabble or mystical double-talk or twisted gender-reversals, masking latent queer content. Jay Little told it like it was, using the salty, often bitchy language of the subterranean set and holding nothing back in terms of storyline or plot. And what is perhaps most remarkable about him is that he did this at the height of the McCarthy era when others were scampering back into their closets to escape the heat of homophobic witch hunts.
I first encountered the name Jay Little as a student in college, taking a course on “Ambivalence in the Novel” (which showed up on my report card in shorthand as “Homos in Lit,” much to my father’s consternation). Compared to Melville’s Billy Budd, and Isherwood’s A Single Man, Jay Little’s novels seemed like tawdry melodramas, early examples of one-handers, high camp homoerotica. They were not taken seriously as literature.
Nevertheless I went out of my way to find copies, and located both novels, in hardcover, at the Strand in New York. Even then, in school, I was aware of the double standard in academia of judging literature by whether or not it fit into the canon of so-called quality fiction. A book like Maybe-Tomorrow may not have had the literary gloss or depth of Vidal’s work or James Baldwin’s Giovanni’s Room, but from the standpoint of culture, it is as relevant, and certainly deserves renewed consideration. 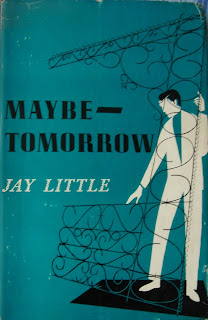 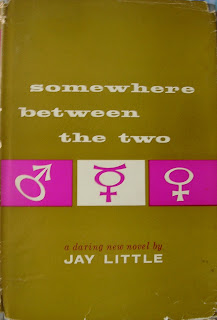 At some point, Tex put the manuscript aside and began Maybe-Tomorrow, which was based almost entirely on his own experience growing up in El Campo, and took the sex talk to a whole new level. His erotic infatuations with locals are set against recognizable back-drops: the railway depot, the drug store, the school hall. Even Gaylord’s home life bore a striking resemblance to Tex’s own: a single child; a handsome, masculine father; a devoted mother; the close-knit friendships with neighbors. What Roger Austen had read as fantasy was actually not that far from the truth. Ray tells me that Tex did indeed have an affair with the local jock. “They were madly in love,” Ray says. “His parents had a big ranch. But he had to get married. He and Tex kept in touch for the rest of their lives.” Tex even kept a picture of him on his dresser, long after settling down with Chuck. “His mother told me they were inseparable,” Ray adds. Had this fellow read the book? “I would not be surprised.”
It’s possible that Tex submitted Maybe-Tomorrow to traditional publishers, and was rejected. That part of his history is still unclear. He sent it to Pageant Press and probably paid for its printing costs. It was barely edited and sometimes the print is laid out oddly on the page. And I wonder if a standard publisher would have left in that peculiar hyphen in the title. Despite being on the fringe of publishing, Pageant did a good job marketing the book. It was a hot ticket, selling out almost immediately, although such self-promoted books would not register on any official bestseller lists. “Tex told me,” Ray says, “that he made his first $100,000 from that book.” The copy I have is a fourth printing, which is highly unusual for a first-time novelist. Whatever its circulation, the book created a sensation. Gay men across the country warmed to its positive slant and its campy lingo. Nothing like it had ever been seen before. In fact, it contained one of the first vivid descriptions of masturbation (long before Portnoy’s Complaint scandalized a new generation): “Oh, Bob... Bob, he thought, and the blood in his veins hardened and grew warm. He tightened his palm, and out of the pounding motions, came; I shouldn’t do this... I’ll feel tired afterwards... I’ll... he closed his eyes and wished he had never begun this evil vice...”
Perhaps for this reason, The Standard Times of San Angelo, Texas wrote: “Maybe-Tomorrow is more than most people will be able to take. It gets down to too many brass tacks...” Which I suppose is a polite way of saying it is smut. But the mere fact that they reviewed it is remarkable. Same with The Navy News Review in San Diego, which maintained an unusually open mind, considering the times: “We can understand why many persons could find the book shocking, but we feel it is the subject that is shocking—definitely not Jay Little’s frank, uncompromising description of it. To mince words and hint at the subject would have weakened the force of his message. It is a book adults should read if they truly want to know more about one of the little-known segments of the human race.” Clearly the Navy then, at least in print, didn’t see homosexuality as a threat to military readiness.
But not everyone was as comfortable with the subject matter. Donald Webster Cory (the pseudonym of Edward Sagarin), a criminologist who joined the Mattachine Society and wrote the ground-breaking books The Homosexual in America and Homosexuality: A Cross Cultural Approach, felt that Jay Little’s book was too hot to handle. He refused to carry it in his influential Cory Book Service, which carried homophile books. In a 1953 letter to “Jay Little” he writes that he considers it “a very fine piece of work,” and that he is going to review it, which he hopes will “help to sell it.” But he adds, he can not carry it. “We have not only been advised, but ordered by our lawyers, not to use your book.” Perhaps the lack of guilt in Little’s book scared Cory. A deeply conflicted man, he later became one of the most outspoken detractors of the more blatant aspects of the gay liberation movement. 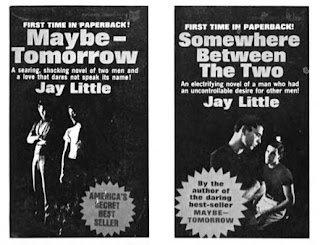 Little’s books were republished in the ’60s by Paperback Library and were marketed as gay pulps. Many readers wrote him fan letters, which he saved, including a clerk at United Artists who said that “at times I feel that life is cruel, and then again I feel it is wonderful, more so since I read your book.” One of those fans was Lance Horner, co-author, with Kyle Onstott, of the best-selling Falconhurst slave novels that began with Mandingo. Horner also wrote Child of the Sun, a lurid look at the gay emperor Elagabalus. He wrote “Jay” sporadically and seemed to rely on him for support during times of “extreme depression and nervousness.” Lance Horner died in 1973. Clarence Miller also remained good friends with Jon Pinchback, the illustrator who had done his book jacket portrait. The original now hangs in Ray’s house.
Apparently Clarence Miller had finished a third manuscript, title unknown. Seth Richards, Pageant’s editor in the ’60s, was eager to publish it. In a 1964 letter to Clarence L. Miller, he says he has asked “innumerable times to see it,” but for some reason Tex didn’t send it. Perhaps he hoped to land a contract with a more established house, or wanted a real advance. Ray says the book was sent out to editors later in Tex’s life, but was rejected by publishers who found, Ray says, “that it wasn’t racy enough.”
Very few people, aside from his close circle of friends, knew that Clarence Miller had written any books at all. His parents, Ray is sure, did not. Tex’s father died in 1960. By then, he and Chuck had already moved back to Houston where he ended up buying the house at 235 Hathaway. His mother moved in with them. Chuck died in 1973 from a heart attack. Elsie died in 1977, in her late 80s. Tex remained in the house until his death, being ably served by a sassy African-American maid named Valda who became one of his closest friends. He left her a good deal of money in his will.
When Tex died in 2001, his two books were mentioned in his obituary, as well as several telling accolades. “Tex may have been slight in stature,” the notice said, “but he was a giant when it came to humanity and compassion. He made friends easily, and people of all ages were attracted to his inimitable brand of wit and the fact that Tex himself remained ageless.” He was honored with a lavish wake. “They broke the mold when Tex was born,” Ray’s partner Marc says. “You should have seen his funeral. It was amazing the number of people who showed up.” But outside Houston circles, his legacy was essentially unknown.
Perhaps now, with greater acceptance of popular literature in academic circles, with the rise of smaller presses thanks to the internet, and more interest in celebrating milestones of gay history, Jay Little’s work will be reprinted, and will continue to enthrall, titillate, scandalize and amuse a new generation.