The Poet of Apprehension

(Twenty years ago, I wrote a profile for Out Magazine about author Patricia Highsmith that appeared shortly after her death. Back then Highsmith was relatively unknown to the public at large. Her ground-breaking lesbian novel The Price of Salt had been written under a pseudonym. Some took me to task back then for allegedly "outing" her. But times change. Since then numerous books have been written about Highsmith, and her work is very much back in vogue. One of my favorites of her novels, The Blunderer, has just been reissued. And a film based on The Price of Salt called Carol is garnering rave reviews. I thought it might be fun to look back at my article, written before she was a household name again, and to revisit the peculiar genius of this now-legendary writer.) 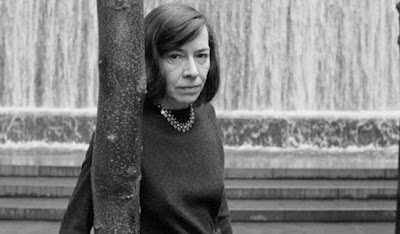 “Sometimes I think that the artistic life is a long and lovely suicide, and I am sorry that is so." This quote, from Oscar Wilde's personal letters, was used by Patricia Highsmith in a foreword to one of her twenty-one extraordinary novels. It might as well have been her epitaph (she died of leukemia at age 74 in Switzerland on February 4, 1995), for the statement sums up so simply the eerie melancholy that colored her lifework.

From her first novel, Strangers on a Train (immortalized, if bowdlerized, in Hitchcock's classic thriller), to her last, Small g: A Summer Idyll, about a bizarre gay bar in Zurich (published in London, just days after her death), Patricia Highsmith probed the dark depths of paranoia, delving into the minds of homicidal psychopaths and their victims. Very often, in her world, crime did pay. Her short stories were horrifying, frequently grotesque: A rat devours the nose of a small child; a snail lover is smothered to death by millions of his slimy pets; a man saddled with a deformed baby strangles an innocent passerby in a sudden act of revenge. 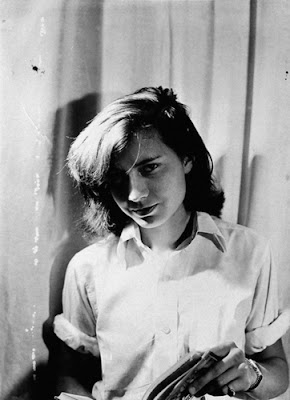 One treads gingerly in Highsmith's troubled universe, never knowing what waits around the corner. Graham Greene called her "the poet of apprehension." But she was also haunted by her own demons. Pegged early on as a suspense writer, Highsmith transcended the genre, gaining cult status even as she was ignored by most American literary critics. Those who did pay attention compared her to Henry James, Dostoyevsky and Poe. Immensely popular in Europe, her books were filmed by Wim Wenders, Rene Clement, and Claude Miller, and garnered numerous awards. But she never caught on with the American public, no doubt because she didn't portray them in flattering terms and had little patience with middle-class conceptions of good versus evil. To her, justice was a man-made conceit.

Novelist and director Michael Tolkin (The Player) says, "She was one of the best writers in the world. I have never read a review of her work where there wasn't some hedging on the part of the critic, a slightly superior tone because she was a girl or writing in this genre. But she was a great writer, the last turn of the dial to unlock my novels. I don't think I could have written The Player without her."

Few people, know, however, that Patricia Highsmith, by all accounts a passionate, yet very private lesbian, was also an important figure in gay literature. In 1952, fresh from her success with Strangers on a Train, she wrote the groundbreaking novel The Price of Salt. Perhaps fearful of being branded a "lesbian author" as she had been a "mystery writer," Highsmith wrote under the pseudonym Claire Morgan. Or perhaps she could not reconcile her lesbianism with her public profile. 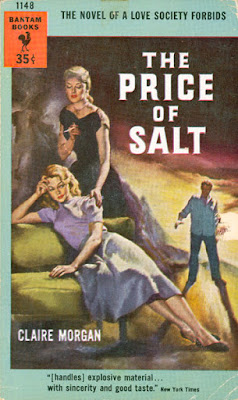 For decades this heartfelt romance, one of the first lesbian novels with a happy ending, was required reading for young women (and many men) eager to overcome their isolation and loneliness. Reissued several times, most notably by Naiad Press, the book is still in print. Eventually, Naiad publisher Barbara Grier convinced Highsmith to use her own name on the book. "I worshiped that book," Grier says, recalling the thrill of discovering it in 1952 in a department store in Kansas City. "It was a very upbeat, pro-lesbian book, which in itself was a miracle." 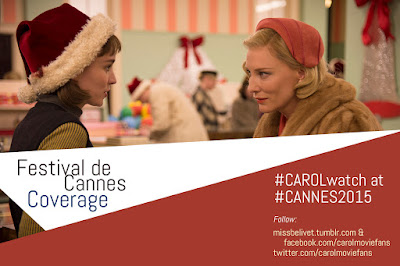 Highsmith's representative Anne Elisabeth-Suter estimates The Price of Salt has sold hundreds of thousands of copies worldwide, so its impact cannot be ignored. But none of her major obituaries mentioned it, except for a personal piece by Tolkin in the Los Angeles Times. In fact, the original New York Times' obituary did Highsmith another disservice by erroneously calling her "Ms. Ripley," confusing the author with her more diabolical creation, Tom Ripley, an engaging American psychopath, living abroad, who continually gets away with murder.

No doubt Highsmith, master of irony, was laughing in her grave. She often said that Ripley, not she, had written the first of the five books in which he appears. That novel, The Talented Mr. Ripley, was developed as a project for Paramount Pictures by Sydney Pollack and William Horberg. "Highsmith was one of the great postwar novelists," Horberg says. "Her books are impossible to put down. The Talented Mr. Ripley is a profound love story. Ripley loves Dickie Greenleaf but can't have him, so tragically, he destroys him." The novel was made into the classic Rene Clement film Plein Soleil, aka Purple Noon, starring Alain Delon. 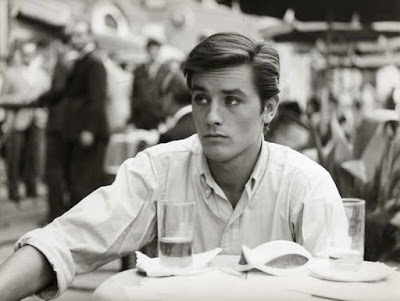 For all their psychological intrigue, Highsmith saw her books merely as entertainments. Favoring emotions over style, she wrote in a spare, declarative tone that weaves a terrifying spell. The monotony of quotidian details lulls the reader into a false sense of security. Her protagonists are always cooking, drinking, or making their beds, so that when a murderer suddenly acts, the horror is infinitely more dramatic, raw. In The Boy Who Followed Ripley, one of her most affecting and disturbing novels, Highsmith grippingly depicts Ripley's growing affection for a handsome young man who has murdered his invalid father in Maine by pushing his wheelchair off a cliff. He turns to the notorious Ripley for support. Later, Ripley dresses in drag for a rendezvous at a gay bar and commits murder to save the boy's life.

What was behind Highsmith's fascination with death and murder? One can only suspect it stems from her private obsessions. She was born Patricia Plangman in Fort Worth, Texas, in 1921. Her parents, commercial artists, had divorced before she was born. Patricia lived with her maternal grandmother until age six, when she moved with her mother to New York. Her mother remarried a man named Highsmith, who later adopted Patricia. Highsmith didn't meet her natural father until she was twelve. In interviews she hinted that her childhood was less than happy. Emotional turmoil was constant.

A clue to her feelings may be gleaned from her early writings, odd little stories about homicidal children. She was inspired by a clinical text her family owned called The Human Mind by Dr. Karl Menninger, filled with vivid case studies about pyromaniacs, sadists, and kleptomaniacs. Highsmith used it throughout her career as a character bible. "The Terrapin," for example, concerns a lonely boy whose mother dresses him in children's clothes. Alienated from his peers, in particular a bully next door, the youth grows increasingly hysterical until he stabs his mother to death after she boils a turtle alive. One wonders, with a chill, if Highsmith's mother ever read that story.

Highsmith attended Barnard College, where she edited the school literary magazine. There she met journalist Kate Kingsley Skattebol, who corresponded with Highsmith the rest of her life and remained a devoted friend. Skattebol recalls Highsmith as a droll, impish wit fond of practical jokes, scatological humor, and bawdy limericks. "Her writing talent was evident in college," she says. One of her earliest tales, "The Heroine," about a deranged nanny who sets fire to a house where she works, was rejected by the Barnard magazine, Skattebol says, because it was "too unpleasant." It later appeared in Harper's Bazaar and the short story collection Eleven, regaining notoriety decades later during the scandalous Swiss nanny murder trial. Some thought the alleged killer (later acquitted) might have been inspired by Highsmith's story. 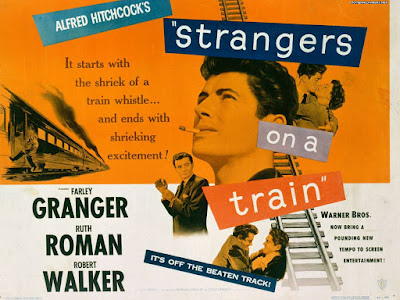 An early friend, Truman Capote, championed Highsmith, helping her to get into Yaddo, where she rewrote Strangers on a Train (it had been rejected by six publishers). Over the years, Highsmith also developed lasting friendships with writers Graham Greene, Gore Vidal, and Paul Bowles. When not writing fiction, Highsmith found odd jobs, writing scenarios for Superman comics, or toiling at Bloomingdale's over Christmas. She used that stint as background for The Price of Salt: Therese, the main character, whose dark features and shy, dreamy demeanor bear more than a passing resemblance to the young Highsmith, meets her love, Carol, at a New York department store. "Every adult has secrets," writes Highsmith at the novel's end. And throughout her life she seemed to enjoy harboring her own. "Pat was nothing if not unobvious," says Gary Fisketjon, her editor at Knopf, her last American publisher. "She was not particularly troubled by the fact that she was gay. She couldn't give a shit -- she was Texan until the fucking end." But she preferred leading a private life." 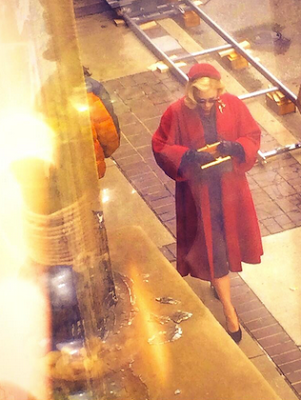 Barbara Grier, who corresponded with her frequently, says Highsmith suffered acutely from "internalized homophobia," which was not surprising, she adds, considering the era in which she was raised. Highsmith's own attitude is put rather succinctly in a postscript to The Price of Salt, in which she states, "I like to avoid labels." An expatriate, Highsmith traveled constantly, moving first from New York to Mexico, then to Italy, England, and France, before finally settling near Locarno, in Switzerland.

Often cold and close-mouthed with reporters, Highsmith disliked publicity. "She hated to come out of her house," says her Swiss publisher Daniel Keel. On more than one occasion she walked out in the middle of interviews. But her sense of humor was well-known. Larry Ashmead, executive editor at HarperCollins, recalls Highsmith telling him how she once smuggled live snails into France by hiding them under her breasts. At the end, Highsmith lived alone with her beloved cat, Charlotte. She was, by most accounts, a loner who drank and smoked to excess.

As a young woman, according to Fisketjon, Highsmith was a "staggeringly beautiful woman." But as she aged, her sturdy masculine features became more exaggerated, almost forbidding. Duncan Hannah, a New York artist, recalls meeting Highsmith at a book-signing. "She was like a Mandarin, almost Buddha-like," he says, "with a dilapidated, very still quality. Being under her gaze was like being under a microscope. It was spooky." 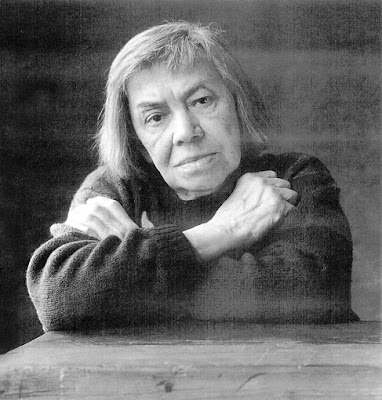 Highsmith seems to have exorcized her demons with her final and most openly gay work, Small g: A Summer Idyll. Sweetly sentimental, with gothic undertones, this dark romance harks back to the young-adults-in-love theme of The Price of Salt, but lacks its focus. In fact, Small g was rejected by Knopf and poorly reviewed in England. But it has unmistakable Highsmith touches: a club-footed homophobe, a bisexual beauty, a dandy diagnosed as HIV positive, and a clever circus dog named LuLu who upstages everyone else. One wonders what Highsmith might have achieved had she brought her literary villains and herself "out" decades ago. But maybe, for her readers, it's better she didn't. For then we might not have experienced the full rewards of her strange, macabre genius.