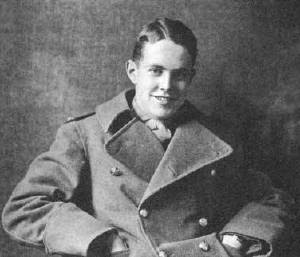 One of the most curious figures of English letters is Beverley Nichols (1898–1983). A Renaissance man of the Roaring 20s and the 30s, Nichols was a handsome, debonair writer and playwright, a pianist, songwriter, actor, mystery writer, gardening expert, sparkling wit, bon vivant, cat champion, noted children’s author, and what used to be described delicately as a “confirmed bachelor,” despite a 40-year long relationship with his male companion. For decades he was inescapable on the British literary and social scene. He knew and was lauded by many of the leading lights of his day. And he outlived many of his staunchest rivals.
Having taken the glitterati by storm with the publication of his precocious memoirs Twenty-Five, coyly penned when he was just 25, after he had finished at Oxford, Nichols went on to write over 50 books, many of them bestsellers. One of my favorites is Prelude, which is set at a public school, and reminds me in some ways of Alec Waugh’s classic The Loom of Youth. It is a charming bit of fluff, with some subtle gay undertones, and proof that Nichols was as good as, if not better than his contemporaries, Michael Arlen and Max Beerbohm. (below, detail from the cover art of Prelude.) 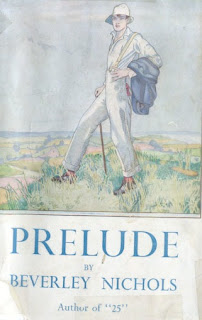 But mention his name today and most people have no idea who you are talking about. And I am not just talking about people in America. Even in his beloved England, Nichols is now nearly forgotten. A dutiful biography by Bryan Connon went a long way to reviving interest in him, but Beverley Nichols still remains one of those singularly talented authors who has fallen unfairly through the cracks. (That’s Nichols, below, at his thatched cottage, with his pet pooch Whoops.) 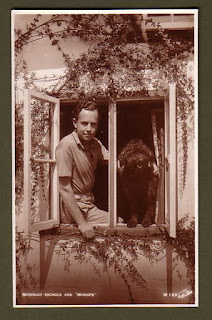 And yet, what a strange, marvelous creature he was! Reading his books, one feels that Nichols would have made a terrific house guest. While he probably wouldn’t lift a finger to help set a fire, or clear the table, he’d pay his way with witty anecdotes culled from his many years cavorting with celebrities, both haut monde and demi-monde. I’d like to grill him about Nellie Melba, the great Australian opera diva. Nichols ghostwrote her memoirs and later tossed off a perfectly brilliant roman a clef, Evensong, about her. It was made into a 1934 film starring Evelyn Laye and Emlyn Williams. But it is the appearance of opera legend Conchita Supervia in it that makes it especially memorable. (photo below, from the film.) 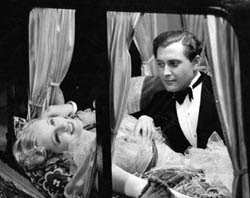 I first stumbled upon the unusual name Beverley Nichols during one of my Somerset Maugham phases (which every young writer goes through). I came across a book entitled A Case of Human Bondage (who could avoid picking that one up at a used bookstore?) It is a scathing attack on Somerset Maugham, mostly for treating his wife, the lovely and influential interior decorator Syrie Maugham, like dirt. What is shocking about this rather short book (it is literally an idee fixe set down on paper) is how relentless it is! There is little attempt on the part of Nichols to balance his criticisms. It is mean-spirited and yet mesmerizing. And he really captures the esssence of Somerset Maugham’s darker side, although the author of Of Human Bondage liked to compliment Nichols on always looking “spruce.” 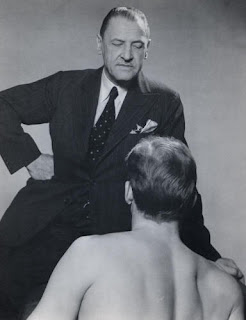 Most scholars and biographers bend over backwards to either prove their points or at least offer a countering opinion. Not so with Nichols, who rarely minced words, although the tone of many of his books is rather mincing to say the least. I found I could not stop re-reading sections of this vicious volume to friends. I asked a writer chum of mine in England if he had ever heard of this fellow with the odd first name, Beverley (at least on this side of the Pond, most men are not called Beverley, even with the extra “e”). My pal vaguely recalled seeing Nichols out and about, an eccentric raconteur who was a fun addition to a party. But he could not add much to my knowledge of who this man really was. Or how he came to write this wickedly fun little book.
My appetite whetted, I devoured the few more books by Nichols I could find. This was back in 1998 just as eBay was getting going. I found copies of his much-admired gardening books via Australia, Canada and Great Britain. I even ordered some from Hong Kong. It seemed as long as there was a sun setting on the former British empire, one could find a copy of a book by Beverley Nichols, even if it was dog-eared or ex-library. And for mere pennies! 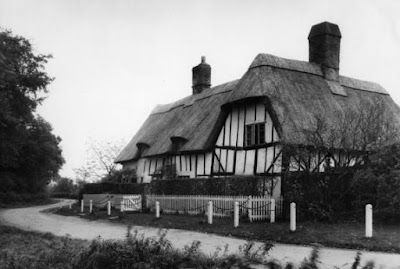 These gardening tomes, originally designed with whimsical illustrations by Rex Whistler, (and later by William McLaren) were also a revelation since they are told from the point of view of a man who clearly spent a great deal of time admiring his garden but who did very little actual gardening himself! He relied on the help of his staff, in some cases inherited from the home’s previous owners. 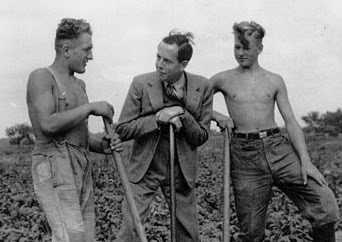 The tone of what might be called the “herbaceous border” series, which began beautifully with Down the Garden Path (a typically wry Nichols title) is downright delicious. Nichols pokes fun at his stuffy neighbors and prissy socialite friends, as well as excoriating his ego-crazed gardening rivals. And he does it all with stylish, effortless prose that is a joy to read. The book was a runaway bestseller and helped restore Nichols to the limelight. His star had been a bit dampened after his early brash successes by a series of less-than-stellar journalistic efforts. His diversity, however, was astonishing, ranging from books on politics and religion, to folk tales and treatises on flower arranging. I was not as enthusiastic about some of these, such as The Star Spangled Manner; Are They The Same at Home?; Women and Children Last; Uncle Samson. What one discovers here is Nichols struggling to find his niche, while being paid handsomely to do it. Ironically, he wouldn’t have been able to afford the squire lifestyle which he described so vividly in his various “country” series if he hadn’t done these rather humdrum hack jobs. 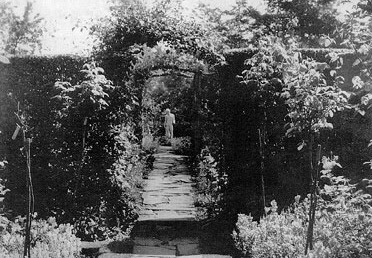 Down the Garden Path was followed by a succession of equally amusing books: A Village in a Valley and A Thatched Roof. Then Nichols traded up, buying a Geogian pile, glorified in Merry Hall and its two follow-ups: Laughter on the Stairs and Sunlight on the Lawn. 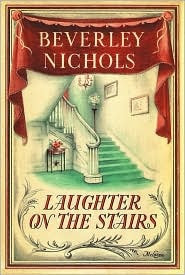 He later sold that white elephant and moved to a grim sort of rowhouse with an ugly backyard which he tried (vainly, I believe) to improve with brick walls and lavish garden ornaments. It was written up in Green Grows the City. That is the only time I felt Nichols was faltering. (That’s him, below, gazing adoringly at his “folly” in the odd corner of his tight plot.) 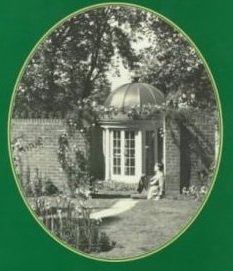 He later returned to a more luxurious lifestyle with another country house, Sudbrook Cottage, this time immortalized in Garden Open Today, and later, Garden Open Tomorrow. One of the best of the later books is Down The Kitchen Sink, a culinary excursion that is filled with brittle asides about nosy neighbors, and cottage chitchat.
For my money, however, I have a special place in my heart for Nichols’ eccentric mystery novels. No Man’s Street. The Moonflower. Death to Slow Music, etc. These curious efforts began, one has to believe, as a bold attempt to cash in on the rage for Agatha Christie style whodunnits. Nichols’ take on it, however, was typically subversive and slightly wacky since his character, Mr. Green, solved crimes not with his insightful intellect or his magnifying glass, or even his snooping skills, but with his incredibly sensitive nose. He had an inordinately gifted olfactory ability, which led to some pretty startling surprises. 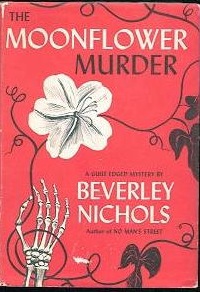 It’s clear reading these potboilers that Nichols was having a great deal of fun pushing the envelope of the genre, satirizing his friends (including Noel Coward and Ivor Novello, whom he considered his rivals as well), and introducing slightly risque gay themes into the plots at a time when such things were still tightly wrapped in the closet. 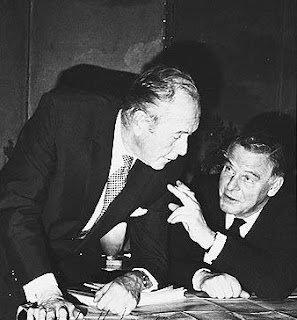 Beverley Nichols also had a serious side and this is evident in some of his political screeds, such as his pacifist tract: Cry Havoc!, or the immensely passe Verdict on India. And some might question his mental faculties while reading Powers That Be, a rather hodgepodge examination of psychic phenomena. 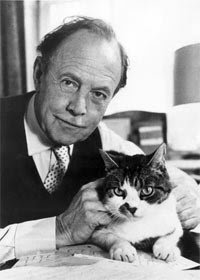 No, Nichols belonged in other realms divorced from otherworldly forces or dry diplomatic diversions. Perhaps one can argue that his book on his family’s painful bouts with alcoholism, Father Figure, suffers a bit from this tendency towards being “de trop”, but who can resist its opening line? — “The first time I remember my father he was lying dead-drunk on the dining room floor.” Or this later comment? “The occasion of my third attempt to murder my father can be precisely dated and it is not a date that I am likely to forget.”