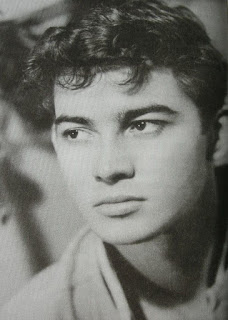 The other day while channel surfing, I stumbled upon an old film that I had never seen before: Ten North Frederick (1958), based on the popular John O’Hara novel. This A-list picture starred Gary Cooper and Geraldine Fitzgerald, as well as a young Diane Varsi. Suzy Parker played Cooper’s love interest. So how could I not watch? But the big surprise in the cast was a young actor that I vaguely recognized from other pictures named Ray Stricklyn. He was cast as Cooper’s tortured soldier son, battling a drinking problem and a massive chip on his shoulder due to his father’s highhanded negligence, and his mother’s firm hand. 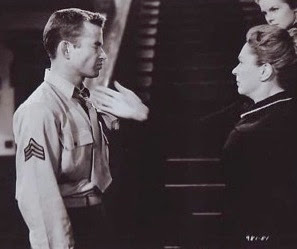 Intense, trim and wiry, with dark, sultry good looks, Stricklyn oozed a dynamic sensuality that resonated with me. This was the epitome of juvenile angst that movies in the 50s thrived on.  Only here, it was obvious to me (and countless other like-minded souls, I'm sure) that there was something other than delinquency seething under this sad young man’s skin. Stricklyn gave off unmistakable gay vibes that served to enhance his performance rather than distract from it. He used his ambivalence to make the part stand out. For a youth to hold his own against the likes of Gary Cooper and Geraldine Fitzgerald was remarkable unto itself. But this young actor had something unique — a kind of feral rage — that I found instantly appealing and intriguing. 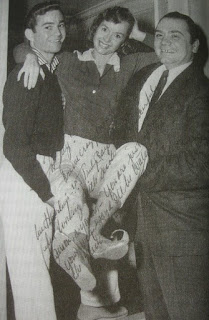 I looked up Ray Stricklyn’s IMDB record to find out where else I might have seen his face. One of his first roles jumped out at me. He had played the brother of Debbie Reynolds in the Paddy Chayefsky classic, A Catered Affair, one of my favorite of Bette Davis’s later films, above. Almost a cameo role, Stricklyn’s turn as a high-strung, but likable, teen had stuck in my mind. And apparently in Bette Davis’s too. She and Stricklyn, I learned, hit it off and remained close friends for many years.

The juvie classic Crime in the Streets (1956), directed by Don Siegel, starred John Cassavetes and former Yalie James Whitmore. Sal Mineo is the stand-out in a breakthrough role as a teen under Cassavetes's thumb, but keep your eye out for a young Ray Stricklyn as one of the gang members. 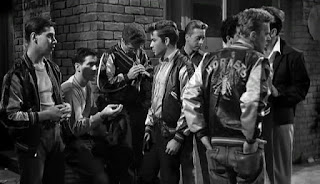 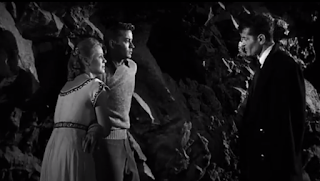 Curious about his career, I tracked down some of his other roles, including the campy horror film The Return of Dracula (1958), above, co-starring Francis Lederer, in which Ray, somewhat less convincingly played the young starlet's love interest. He also appeared in a couple of westerns, such as Young Jesse James (1960), and played Billy the Kid on a Bronco TV episode, below. 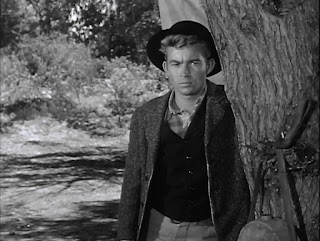 I also did a quick Google search. One link popped out at me and made my jaw drop. Ray Stricklyn had been on the notorious “Spy List” back in 1990, along with Milton Berle, Kevin Costner, Tommy Lee, Don Johnson, Mick Jagger, Tom Jones, and Rudolph Valentino.

One didn’t need to be a rocket scientist to figure out what these men all shared in common, especially since Tommy Lee would later show the world his credentials in explicit videos with Pamela Anderson. I certainly remembered Spy magazine’s list — which had created a sensation (this was before the days when things went viral online) — but had no memory of Ray Stricklyn, who it turned out, was the only one on the list who was openly gay. (Valentino was a bit more complicated.)

I decided to order the autobiography Stricklyn had written a few years before his death. Entitled Angels & Demons, One Actor’s Hollywood Journey (1999), the book is a fiercely candid, trenchant peek into the Hollywood studios's twilight years, and his struggles with his homosexuality. While many recent memoirs by gay actors have been informative and eye-opening — in particular Farley Granger’s Include Me Out, and Tab Hunter’s Confidential — Stricklyn’s autobiography goes far beyond theirs in terms of self-examination and soul-searching, and chronicles the highs and lows of a failed Hollywood career with an honesty that is at times painful to read. 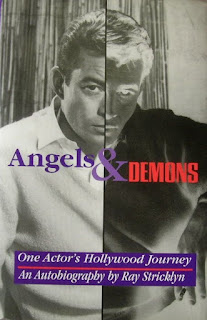 While not the juicy homoerotic exposé one might expect (Tony Perkins’s bio, Split-Image, by Charles Winecoff, is much more rewarding in that regard), Stricklyn’s memoir does have its amusing kiss-and-tell moments, especially during an incident in which he and James Dean were lounging together in Central Park, with Dean’s head in Stricklyn’s lap. Dean suddenly pulled Stricklyn down and kissed him full on the lips. It’s a tender moment between two friends, nothing more. But that was the effect Stricklyn seemed to have on those around him, although he recounts a hilarious moment in Lee Marvin’s dressing room when the unpredictable actor pulled out a gigantic phallic-shaped dildo and nearly attacked him with it. Stricklyn didn’t stick around to find out what precisely Marvin had in mind.

While working with some of the hottest actors of his day (including Dee Pollock, Bill Smith, Ty Hardin, Paul Newman and “cocky actor” Nick Adams, with whom he did not get along), Stricklyn did not mix work with pleasure often. He lists among his lovers Tab Hunter (no surprise there); Tony Perkins (a quickie in Central Park); Craig Hill, a handsome TV idol (Whirlybirds) who went on to make westerns in Spain and later married; and his lifelong partner David Galligan, an antiques dealer who became a noted stage director. Stricklyn didn’t shy away from sex, but it was not his number one preoccupation. He tried to go straight (via psychotherapy) or at least to swing both ways for a while (flirting with Joan Collins), but that only exacerbated his already significant drinking problem. Ray Stricklyn had several demons struggling inside him. 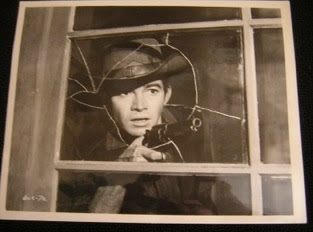 But it’s clear that the perception of his homosexuality had a major impact on his career. While he landed good roles in important films such as The Proud and the Profane, The Remarkable Mr. Pennypacker (playing Clifton Webb’s son), The Big Fisherman, The Plunderers, and The Lost World, he struggled to find regular work. Despite garnering accolades in almost every role he took on, Stricklyn was not given the leading roles he needed to firmly establish himself in Hollywood. The demise of the studio system was a major factor since his contract was not renewed when Fox ran into financial problems. 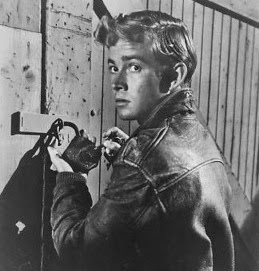 But watching his performances, one can’t help but be struck by the almost androgynous appeal Stricklyn showed — sort of a cross between the angst-ridden rebel of James Dean and the sensual vulnerability of Sal Mineo — and wonder if he was not a victim of his times. He did do a lot of TV work and had significant success in several stage plays, including Compulsion and Capote’s The Grass Harp, below. But his career seemed to be a never-ending stream of hopeful fits and false starts. 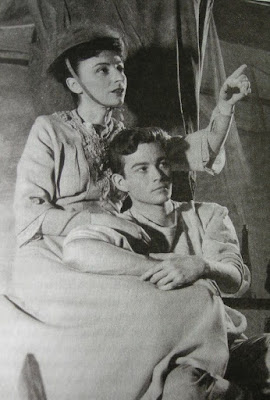 Stricklyn gave up acting for a time, working with the legendary PR mogul, John Springer. Stricklyn’s memories of promoting Peggy Lee, Mae West, Henry Fonda and Bette Davis are some of the highpoints in the book. But he yearned to return to the stage. It was Bibi Andersson, of Ingmar Bergman fame, who spurred him on to give acting another try. After several potent parts in plays, including Vieux Carré, for which he won the Los Angeles Drama Critics award for best actor, Stricklyn wrote and starred in a one-man show about that work’s author, Tennessee Williams. The show, Confessions of a Nightingale, toured the country for years, opened on Broadway (even the irascible John Simon liked it) and made Ray Stricklyn a bona fide star. 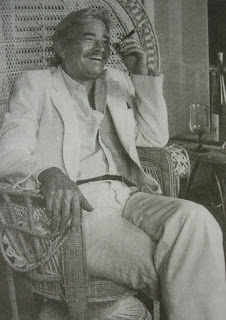 It’s gratifying to see a man fulfill his dreams. But apparently from what I’ve read elsewhere, Stricklyn never was able to shake off his demons. He did get sober in AA, and settled down to a happy partnership with David Galligan. But he continued to be wracked with worries and anxieties, smoked four packs of Kools a day, which led to a severe case of emphysema that eventually killed him in 2002. One friend wrote that even as he approached death, Stricklyn never lost his edge. He greeted death with rage, not submission. 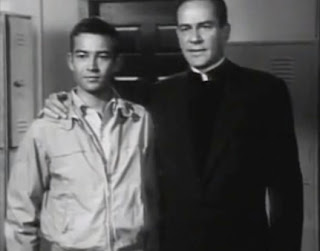 Just for the heck of it, I looked up Ray Stricklyn on YouTube to see if any of his old TV shows might be posted. And lo and behold, one was: an episode of the 1957 inspirational series, Crossroads, entitled “A Call for Help,” above, starring Richard Carlson and a young Michael Landon. Stricklyn plays a Mama’s Boy who is picked on by a local gang led by Landon. 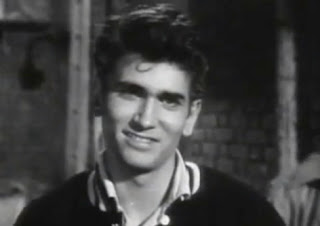 To prove he is not the “sissy” they repeatedly call him, Stricklyn grabs his father’s gun and shoots Landon and another boy, killing the latter. He is put on trial and defended on the theory that he was fighting more substantial inner demons (which I presume to be 50s doublespeak for homosexuality). 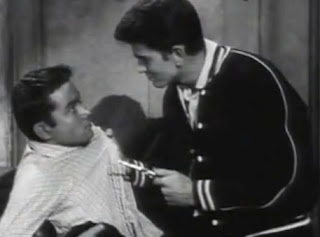 It’s a fun episode to watch, and one that underscores all of Stricklyn’s strengths, weaknesses and ultimately his enormous potential. Of course, it was the sexy bully Michael Landon who became a superstar. One can’t help but wonder what might have happened had their roles been reversed.
Posted by An Open Book at 1:01 PM